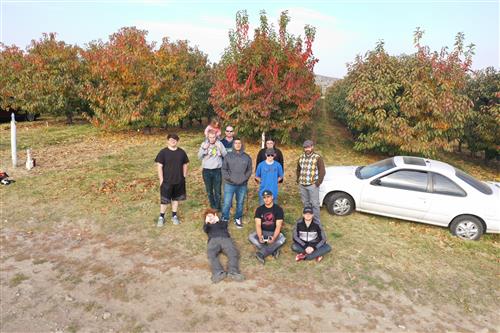 In late October the YV-Tech Drones and Automation class attended a weather balloon launch hosted by the high tech orchardists Domex Superfresh. To literally launch their new line of apples, the Autumn Glory, Steve Potter and the Domex team put together a launch vehicle complete with cameras, gps, and of course, an apple payload. Headed by the returning team of pilots Christian Vargas of Toppenish and Riley Christianson of Yakima, our team provided Domex with videography and photography of the event.

The event was captured by their pilot, the news, our team, and the crafts own cameras and turned into a slick video published by superfreshgrowers on youtube. I want to thank Steve and the rest of the Superfresh team for allowing us to help and be a part of an event jam packed with science and logistical challenges. For days in advance the class and I watched and predicted the path of the balloon using habhub. Habhub allowed us to talk about weather and the jet stream which is important to pilots and small unmanned aerial operators. We discussed payloads and lifting solutions, in this case a weather balloon filled with just enough helium to get the balloon to the desired altituted before the low pressure expands the balloon to its breaking point.

Other videos on their site include video captured by a 350° camera allowing you to look all around as you ascend into the clouds. Thanks for reading, and we look forward to bringing you news from the skies with the YV-Tech Drones and Automation team.