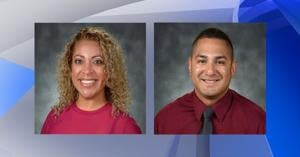 TOPPENISH, WA – Toppenish High School Vice Principal and an English teacher, John Cerna and Bertha Cerna have been accused of selling drugs and alcohol to students, as well as sexual encounters.

These accusations have not been taken lightly by the Yakima County Sheriff’s Office.

Investigators say they are doing all they can to find out more about the accusations.

“Some of the allegations involve the Cerna’s hosting parties that included or encouraged students from the Toppenish School District to attend.” said Casey Schilperoort, Public Information Officer for Yakima Sheriffs Department. “At these parties we heard that there was alcohol being furnished to the minors as well as drugs and sometimes sexual favors.”

The Cernas have been on paid leave from the school district for months now.

They are hoping that anyone who attended parties thrown by the Cerna’s in the past, no matter how long ago it was, to speak up.

The Yakima Sheriff’s Department says right now they are not interested in criminally charging any students or former students with things they did in the past, all they want is information.

“We have no idea how many years this has been going on” said Schilperoort. “We know at least of one year and another one we’ve known at least 5 years but it could go back further so if anyone attended those parties when they were juveniles, we aren’t interested in talking to you about things that you have done or you worrying about that we will go after them criminally. We are only interested in going after the Cerna’s criminally.”

Please call The Yakima Sheriffs Department at 509-574-2500 and ask for Detective Reyna or Detective Cypher.