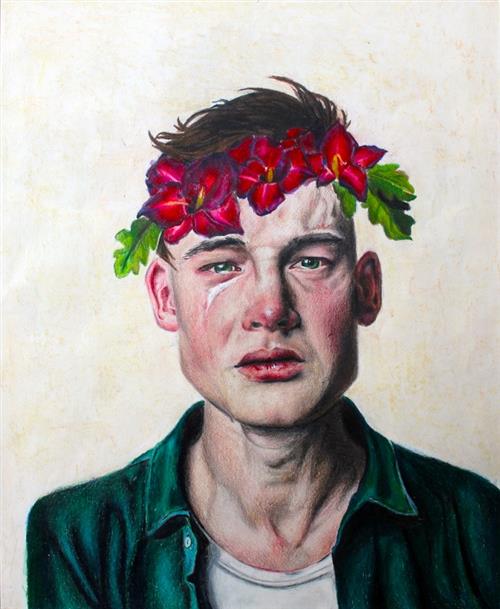 Rocio Garcia, an 11th grade student at Davis High School, won this year’s OSPI Staff Choice Award for her pastel and chalk artwork titled “Boys Don’t Cry.” Rocio is a student of Davis art teacher Carole Huls, whose students have had art entries advance to OSPI’s state show during three of the past four years. The Davis High School student’s work depicts an older boy crying and wearing a crown of flowers on top of his head. The piece will be purchased for the ongoing display of student art at OSPI’s offices in Olympia.

In recorded comments that were included in OSPI’s Facebook live presentation, Rocio said: “I think that both genders should be able to embrace emotion without any fear of judgment from others. The flowers on his head were added later on to represent the view society has that showing emotion is a feminine trait, and that femininity is weak and fragile, kind of like the flowers on the flower crown. But I also wanted to make sure that the flower crown was composed of gladiola flowers, which represent strength.”

Rocio added in her recorded statement: “I don’t think femininity should be viewed as weak or fragile.”

The 2020 statewide show was scheduled to be on exhibit in OSPI’s facilities at the Old Capitol Building in Olympia from April through the end of May. Instead, all 113 pieces in this year’s show are being made available for viewing from OSPI’s Arts website at https://www.k12.wa.us/student-success/awards-recognition/superintendents-high-school-art-show-0.