On Thursday, April 22nd, Ian Kornegay was crowned Mr. Ike 2021 The competition includes fundraising, talent, a letter to a hero, and onstage question. He and the Mr. Ike team raised $17.004 for the Yakima Children’s Miracle Network. This was an incredible feat considering all of the COVID restrictions. In a normal year, thousands more would have been raised. The creativity of the students involved, led by Mary Prentice, head coordinator, came up with such unique fundraisers as a parade and the first annual Easter Egg Your House. Candy-filled Easter eggs were hidden in the yards of people who requested it. 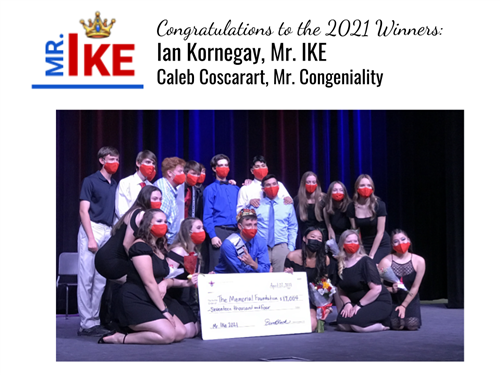 Eisenhower has been raising money for the Memorial Foundation for 24 years. This amazing program has resulted in raising over $300,000. The goal is to teach the students what it means to give back to their community, a principle that drives IKE. We are already planning next year’s silver anniversary extravaganza.

Caleb Coscarart won Mr. Congeniality. This honor is given to the contestant who displayed the most enthusiasm during all of the early morning rehearsals and fundraisers. The 10 contestants and 10 coordinators earn 50 hours of community service each.