We want to send a huge congratulations to the Davis Film Production 2 Class, also known as the DNN Class, this year for receiving a prestigious EMMY Award nomination for their weekly newscasts that are produced each week for school announcements. 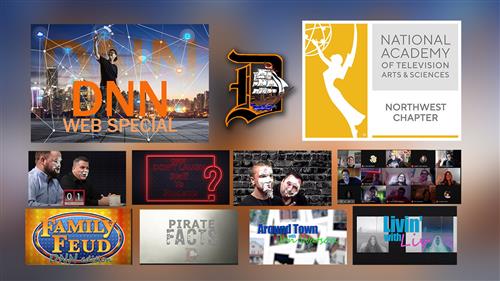 So much hard work is put into each show and they are being recognized by the N.A.T.A.S, which is the National Academy of Television Arts and Sciences – Northwest Chapter.

They were nominated for this award as best High School Newscast in all of Washington, Oregon, Alaska, Idaho and Montana!

Film Production instructor Jeff Rist says this is a proud moment for these students, overcoming so much this year, they all fought hard to not allow the situation they are in to determine the quality of the show.  These students would meet via Google Meet each week, plan a rundown, shoot video from home, create graphics, edit, and so much more.  The teamwork that goes into this show will be skills they carry for a lifetime.

Winners will be announced June 5th!

Be creative!  Be Passionate about the ARTS!  Congratulations DNN Class!