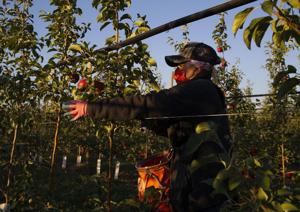 Local growers and officials with the Washington State Tree Fruit Association say the crop of early varieties such as Galas and Honeycrisps is a little lighter than in 2019, but surprisingly good considering the weather and wildfire conditions.

“For us, it’s going good … we’re actually kind of ahead of the game,” said Rob Valicoff of Valicoff Family Farms in Wapato. “Amazingly, the heat and weather hasn’t affected us too bad.”

Barrett Orchards finished picking Honeycrisps and some early Fujis before taking a midmonth break, owner Mark Barrett said. Cosmic Crisp and other varieties will be picked next.

In early August, the Washington State Tree Fruit Association predicted a 2021 statewide apple crop of just less than 125 million 40-pound boxes. That amount is a 2.3% increase from 2020’s 122 million-box apple harvest but would be short of 2019’s harvest of 134.5 million boxes.

“We’ve been told by members that the early varieties (Gala, Honeycrisp) are a little lighter than first predicted,” Kovis said.

“Some years, the early varieties are a little light, and the later varieties (such as Red Delicious. Granny Smith and Cosmic Crisp) are a little heavier. So we’ll have to wait and see.”

Valicoff echoed Kovis’ prediction about the later varieties of apples, in part because the triple-digit heat of late June and early July occurred earlier in their growing season.

He reported that the early-harvested Gala and Honeycrisp varieties were “about 10% light” in his Lower Valley orchards, but predicted Golden Delicious, Granny Smith and Cosmic Crisp harvests would be about the same as last year, with the Pink Lady harvest “probably a bit more.”

Sean Gilbert, with Gilbert Orchards, estimates that he’s about halfway through the harvest, which he said may be smaller due to temperatures.

“Yields are down on apples, but the quality seems excellent,” Gilbert said. The heat “played a role in yields being down, but the cooler temperatures more recently have helped to moderate things already.”

The tree fruit association’s forecast was issued about the same time as the Schneider Springs Fire began burning on Aug. 3, sparked by a lightning strike about 18 miles northwest of Naches. The fire led to weeks of unhealthy air quality, which has improved recently.

The impact of the smoky air on the apple harvest remains to be seen, Kovis said.

“One anecdotal issue we’ve heard about is growers who have been using shade cloth due to the heat might have to remove it due to the smoke,” Kovis added. “With the amount of smoke we’ve seen in the past month and the shade cloth, it’s almost two levels of shade.”

Whatever its effect on the apples, the wildfire smoke and poor air quality it produced definitely impacted his 15 workers, Barrett said.

“The smoke has been pretty tough on our employees, as far as being outside,” he said. “The (Schneider Springs) fire started right at the start of peach season, and we had to work through that.”

“And we made sure everybody had masks,” Barrett said. “They don’t like working with masks — that’s always been a tough thing to get across to everybody, that it’s good for your health.”

Valicoff did not require his 180 employees to wear masks, but some brought their own, and Valicoff Family Farms had N95 masks available for workers who wished to wear them.

“We didn’t mandate them … we had a few days with heavy smoke, but it wasn’t as bad down here as it was elsewhere,” Valicoff said.

This year’s harvest is expected to be led by Galas for the third year in a row, the tree fruit association predicts. Galas should represent 21% of the harvest, followed by Red Delicious (16%), Honeycrisp and Granny Smiths (14%), and Fujis (13%).

Cosmic Crisp, a newer variety, is expected to represent 3% of the crop, which would be a 114% increase from 2020, the association reported.